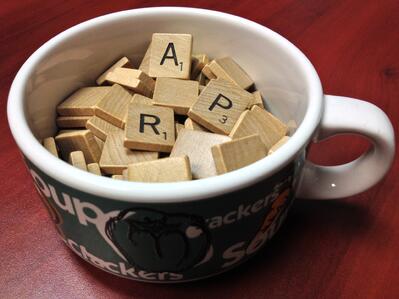 My initial plan for this blog post was to attempt to unravel the alphabet soup approach to all things technology related – Why so many acronyms?!? However, upon doing a little bit of research on the origins of acronyms (retronyms, neologism, and alphabetism oh my!), I quickly talked myself out of that and settled on one particular acronym.

Okay, so that was two. However, in my defense, I’m only planning on blogging about the first one. I just have to cross my fingers and hope my flagrant use of random letters doesn’t get squashed by an editor : )

Reverse ARP (RARP) is a similar protocol that performs a mapping between a hardware address and an IP address. RARP can be used by a host to dynamically discover an IP address if it has not been configured with a static IP address. RARP has largely been replaced by the Dynamic Host Configuration Protocol (DHCP) because it is more robust and easier to manage.

You can view the ARP table on a Microsoft Windows host by issuing the arp -a command. The following command output displays some sample mappings you might find when you issue this command to display the contents of a host’s ARP cache:

Similarly, you can issue the show ip arp command to display the ARP table on many Cisco devices.

FTR (for the record), IP and DHCP are technically initialisms, not acronyms, just in case you’re keeping score. Initialisms are spoken one letter at a time. ARP and MAC, on the other hand, are true acronyms because they are pronounced as a word, not the individual letters that make up the abbreviation. Turns out some form of acronym usage has been around since at least the Roman Empire days, the IT industry just made it a whole lot more popular in the 20th century. I didn’t want to leave you hanging, but aren’t you glad I didn’t spend a thousand words trying to tell you all about how the powers that be in the IT industry like to create names for things that are super descriptive of what the thing actually does just so that they can scrunch the name up into a couple of letters that the average Joe Tech needs to be able to logic back out into the full name when he wants to pass a certification test? That’s not confusing. At all. Right?