If I were to start a conversation with my husband about a “broken ACL,” he would immediately panic and begin searching the Web for evidence that his beloved Megatron was free from injury and that his anterior cruciate ligament (ACL) was in perfect working order. Especially this time of year! Although I’m rather fond of the guy myself, for fantasy football purposes, that’s not the sort of ACL I’d most likely be referring to.

A dysfunctional access control list (ACL) can be just as debilitating to a network as the aforementioned torn knee ligament can be to a wide receiver. In the technology world, an ACL contains a list of rules that a networking device, such as a router or Layer 3 switch, can use to permit or deny traffic. Although network traffic flow control and using ACLs can be a lot more complex, for the purpose of this blog, I want to explore the basics and therefore will stick to standard ACLs. 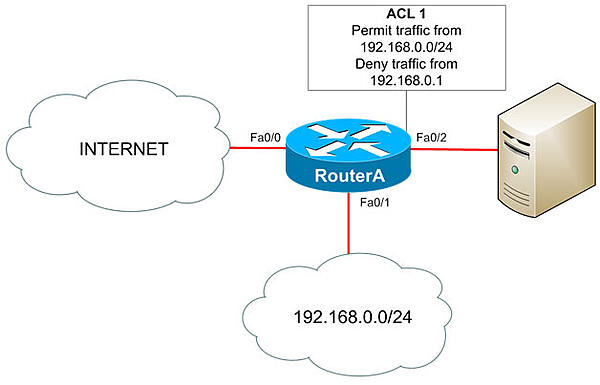 To create a standard ACL you should use the syntax access-list acl-number {deny | permit} {host ip-address | source source-wildcard | any}. So to configure ACL 1 on RouterA, you should issue the following commands:

To apply ACL 1 as an outbound ACL to the FastEthernet 0/2 interface on RouterA, you should issue the following commands:

When a packet that is destined for the server that is connected to the FastEthernet 0/2 interface arrives on RouterA, the router will examine the packet to determine whether the source IP address is part of the 192.168.0.0/24 network. Packets from the 192.168.0.0/24 network will match the permit rule that is configured in ACL 1, and RouterA will forward those packets out of the FastEthernet 0/2 interface. If the source IP address does not match the permit rule, RouterA will drop the packet because of the implicit deny rule.

Now, in the case of traffic coming from the source IP address of 192.168.0.1, what do you suppose will happen there? Since 192.168.0.1 is part of the 192.168.0.0/24 network, packets coming from that source address will be matched with the first access list statement in ACL 1 and will be sent on their merry way. In this case, the second access list statement of ACL 1 is about as effective as my friend CJ would be sitting on a bench with a torn ligament! In order to correct this, you could simply change the order of the list statements to make the deny 192.168.0.1 statement appear before the permit 192.168.0.0/24 statement.

If only the knee recovered so quickly and easily, right?

Studying for a CCNA exam or a CCNP exam? We can help!

Download NetSim Network Simulator and the Boson Exam Environment and demo our IT learning software today.