In Part I of The Seven Layers of Networking blog, John began a discussion about the layers of the Open Systems Interconnection (OSI) model. The first four layers, which you can read about in that blog, are the Physical layer, the Data Link layer, the Network layer, and the Transport layer. In network discussions, you'll most often encounter the first four layers. The final three layers, the Session layer, the Presentation layer, and the Application layer, are not as commonly discussed but are still essential to a network. This blog will cover those three layers and the encapsulation process that occurs when one host communicates with another. Then you'll have to stay tuned for Part III, which will cover a related-yet-different layered model, the Transmission Control Protocol/Internet Protocol (TCP/IP) model.

Two main reasons data networks are organized into layered models such as the OSI model are 1) to simplify communication between two network devices and 2) to facilitate vendor interoperability. To simplify communication, each layer is dedicated to a particular set of functions and is a framework that helps us learn, analyze, and discuss those functions. To facilitate vendor interoperability, each layer acquires services from the layer below and exposes a consistent service interface to the layer above.

Figure 1 below shows all seven layers of the OSI model and represents, at the very basic level, one computer communicating with another one. 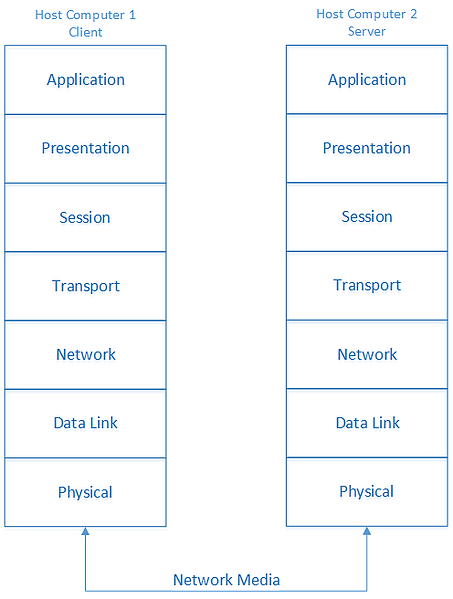 The following is a basic summary of the four layers discussed in the previous blog:

Now that you have a summary of the first four layers, let's continue the discussion with the final three layers. In keeping with Part I of this series, I won't go into an exhaustive discussion of each layer; what you see here will be a brief discussion of each layer so that the next time you hear someone say that Device X operates at Layer Y, or that a certain problem is a Layer Z issue, you'll have a better idea of what that person means.

The Session layer is responsible for establishing, maintaining, and terminating communication sessions between applications or devices. These sessions include service requests and responses, which can be sent back and forth between two parties. Common protocols that operate at the Session layer, also known as Layer 5, include Session Control Protocol (SCP), Remote Procedure Call (RPC), and Zone Information Protocol (ZIP).

Encapsulation can be explained and demonstrated in the following ways; the tables show encapsulation from the top down and from the bottom up:

*The Frame Check Sequence (FCS) field at the end of the payload at the Data Link layer is used to verify that a frame was received without error.

Now that you've seen the basics of the OSI model and its seven layers, you'll have to stay tuned for Part III to find out how the TCP/IP model with its four layers is different from but similar to the OSI model.

If you'd like to learn more about the OSI model, Cisco's Open System Interconnection Protocols page is a good resource that provides a lot of additional detail. Another resource you'll want to know about is our Cisco Courseware from Boson. In addition to more complete coverage of the OSI model than both John and I were able to provide in these blogs, this courseware covers all of the ICND1 and ICND2 topics you'll need to master as you prepare for your CCNA certification.