If you’re like me, the first thing you want to do when you get your hands on a new toy or technology is to toss the instructions aside and figure out on your own what you can make it do. Sometimes the best way to figure out something new is to find ways to apply it to your existing knowledge or skill set. I remember the first time I tinkered with a Doom level creator way back in the 90s. Without seeking help or tutorials, I immediately started trying to build a Doom-world replica of the interior of my house.

Now Boson Software has released NetSim 10.7. This update to the NetSim 10 product contains 12 new 300-135 (TSHOOT) Troubleshooting Ticket labs that have been designed to appeal to the tinkerer within us all.

Each of these labs contains a topology that is significantly more complex than usual, and each topology has been constructed from within NetSim’s own Network Designer. Each topology includes Layer 2 technologies such as VLAN Trunking Protocol (VTP), Per-VLAN Spanning Tree Protocol (PVSTP), EtherChannel, and Frame Relay. Each topology also includes Layer 3 technologies such as Open Shortest Path First (OSPF), Enhanced Interior Gateway Routing Protocol (EIGRP), routing protocol redistribution, Virtual Router Redundancy Protocol (VRRP), and Hot Standby Routing Protocol (HSRP). A sample of one of the lab topologies appears below: 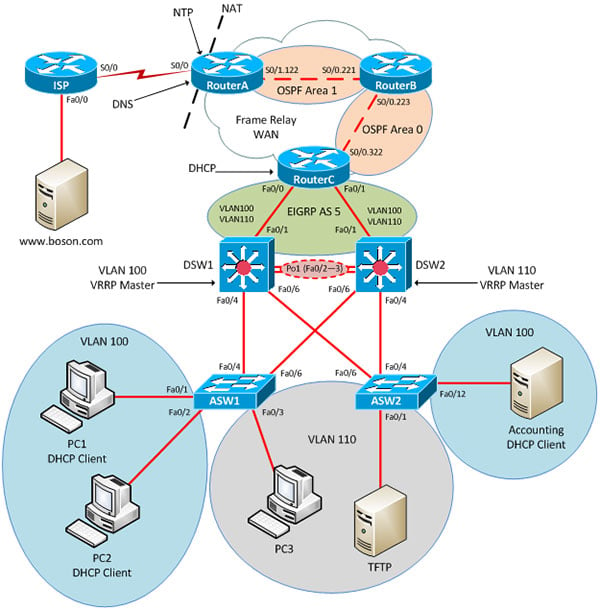 Unlike previous NetSim TSHOOT labs, the new Troubleshooting Ticket labs will not inform you about the specific technology that you must troubleshoot. Instead, you must examine the topology and test the configuration in order to determine where the fault lies, to what technology the fault is related, and how to fix the fault. Each lab contains one solution. However, you might find on your own that there’s more than one way to explore and test a topology.

After all, there’s more than one way to open a new toy.