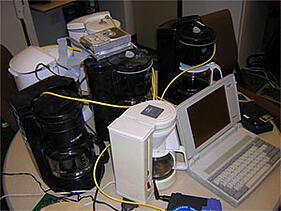 VRRP is another router redundancy protocol supported by Cisco. Routers are assigned to a VRRP group, and the group functions as a single gateway for clients. A VRRP group has one master router, which is the router with the highest priority value. All other routers in the VRRP group are backup routers. A virtual Media Access Control (MAC) address is used to identify the VRRP group to clients. The virtual MAC address for VRRP groups is in the form of 0000.5e00.01xx, where xx is a hexadecimal value identifying the VRRP group number. For example, VRRP Group 1 would be identified by the virtual MAC address 0000.5e00.0101.